Did you know that…

At age 23, Tina Fey was working at a YMCA.
At age 23, Oprah was fired from her first reporting job.
At age 24, Stephen King was working as a janitor and living in a trailer.
At age 27, Vincent Van Gogh failed as a missionary and decided to go to art school.
At age 28, J.K. Rowling was a suicidal single parent living on welfare.
At age 28, Wayne Coyne (from The Flaming Lips) was a fry cook.
At age 30, Harrison Ford was a carpenter.
At age 30, Martha Stewart was a stockbroker.
At age 37, Ang Lee was a stay-at-home-dad working odd jobs.
Julia Child released her first cookbook at age 39, and got her own cooking show at age 51.
Vera Wang failed to make the Olympic figure skating team, didn’t get the Editor-in-Chief position at Vogue, and designed her first dress at age 40.
Stan Lee didn’t release his first big comic book until he was 40.
Alan Rickman gave up his graphic design career to pursue acting at age 42.
Samuel L. Jackson didn’t get his first movie role until he was 46.
Morgan Freeman landed his first MAJOR movie role at age 52.
Kathryn Bigelow only reached international success when she made The Hurt Locker at age 57.
Grandma Moses didn’t begin her painting career until age 76.
Louise Bourgeois didn’t become a famous artist until she was 78. 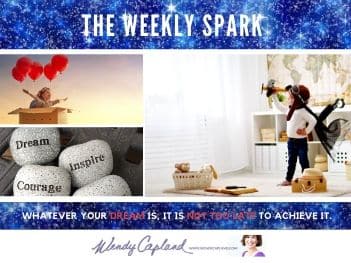 Whatever your dream is, it is not too late to achieve it. You aren’t a failure because you haven’t found fame and fortune by the age of 21, 41 or 61. Hell, it’s okay if you don’t even know what your dream is yet. Even if you’re flipping burgers, waiting tables or answering phones today, you never know where you’ll end up tomorrow.

Here’s to your spark!